The modern Masonic Order of Knights Templar derives its name from the original knights from the time of the Crusades. 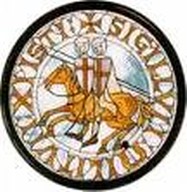 In 1118, nine knights under the leadership of Hugues de Payens, approached King Baldwin II, the Patriarch of Jerusalem; having decided to dedicate their lives to the protection of pilgrims travelling to Jerusalem to visit the Christian Holy Sites. King Baldwin II subsequently assigned them a portion of the al-Aqsa Mosque on the Temple Mount (said to have been built on the site of the original Temple of Solomon). Consequently this group of knights took their name from this: Pauperes commilitones Christi et Templi Salomonis (the Poor Fellow-Soldiers of Christ and the Temple of Solomon), thus becoming known as the Knights of the Temple, and later, Knights Templar. Their seal was symbolic of their vow of poverty showing two knights on a single mount. It is generally accepted that, for the first nine years of their existence, the Templars consisted of nine members.

In the year 1127 the Cistercian Abbot, Bernard of Clairvaux, wrote a rule of order for the Templars that was based on the Cistercian Order's rule of conduct. It is from this that the knights adopted the white tunic of the Cistercians. Additionally, Bernard did a great deal to promote the Templars. Perhaps his greatest contribution to the Order was a letter that he wrote to Hugues de Payens, entitled De laude novae militae (In praise of the new knighthood).  The letter swept throughout Christendom drawing many men of noble birth who joined the ranks of the Templar Order. Those who were unable to join often gifted the Templars with land and other valuables.

While it is true that the Templars were not permitted to own anything personally, there was no such restriction on the Order as a whole. Over the years the Templars rose from their humble beginnings to become the wealthiest of the Crusading Orders – eventually garnering the favour of the Church and the collective European monarchy.

However, after two centuries of defending the Christian faith, the Order met its demise when Philip IV of France – known as Philip le Bel (the Fair) – sought to destroy the Templars. Historians are generally in agreement that Philip was motivated by greed rather than his belief that the Templars were corrupt. Regardless of his motivations, Philip had the Templars arrested on October 13, 1307, and in 1312 the Order was officially dissolved by Pope Clement V.

The earliest reference to modern Masonic Knight Templar activity in England can be found in the minutes of the Chapter of Friendship (Royal Arch) in Portsmouth, dated 1778, where it was worked as an Appendant Degree.

The modern Masonic association with these medieval defenders of the Christian Holy Sites is linked by the ceremony of Installation, in which the Candidate takes the part of a Pilgrim who, by symbolically embarking on a Crusade, is elevated to Knighthood. The ceremony is very realistic and the regalia spectacular, based upon that worn by the Medieval Knights.