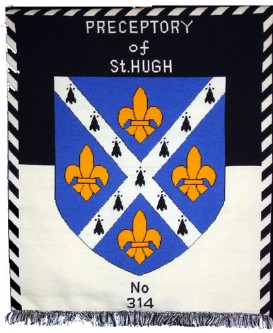 A history of the Preceptory

The Banner of the Preceptory carries the coat of arms of St Hugh of Lincoln, for which special permission was granted by Robert, Bishop of Lincoln in 1995. The banner was made in tapestry by E.Kt Stephen Russell and his wife and donated to the Preceptory. The banner consecration was held on 11th July 1996 and conducted by the Provincial Prior R E Kt Leslie Felgate Dring. It was one of his last official duties as Provincial Prior before becoming Most Eminent and Supreme Grand Master in the following year.

Hugh was born as the son of Guillame, seigneur of Avalon, France in 1140. His mother died when he was only eight years old, following which his father retired to the local Benedictine Monastery taking young Hugh with him.

Hugh thrived on the monastic life and was ordained as a deacon at only nineteen years of age. He soon left the Benedictine Order to join the Grande Chartreuse, a monastic house near Grenoble that had a fast-growing reputation for rigid austerity and the piety of its members. Hugh rose through the order and in 1179 journeyed to England to head the new Witham Charterhouse in Somerset. This Priory had been recently established by King Henry II as a penance for the death of Thomas a Beckett.

When Hugh arrived at the priory he found it in a sorry state and promptly set about building it up to one of the great monasteries of its time. He was a critic of the way that the church was deprived of funds that were siphoned away to the crown, and set up a major conference to reform the way bishops were appointed. When he was elected as Bishop of Lincoln in 1186 he insisted that the clergy confirmed his appointment with their own private election away from the influences of the crown so that he was certain he enjoyed their support.

Hugh quickly established his independence from the King. He saw his office as a protector of the downtrodden and constantly cautioned his monarch that it was their duty to protect the people that God had placed in their care. He was constantly travelling through his diocese, meticulously ensuring the right appointments to senior positions, improving education and helping the poor and humble members of society. Hugh was unflinching in his dealings and stood up to three all-powerful monarchs, Henry II and his equally belligerent sons Richard the Lionheart and King John. That he was able to do this against such single minded and powerful men was in itself a triumph of diplomacy and dignity, as well as a testimony to the values of humility, courage, constancy and faith with which he carried out his work.

Hugh of Avalon died in London on November 16th 1200 following an illness incurred on a diplomatic trip to France on behalf of King John. He was buried in Lincoln Cathedral and thousands flocked to pay their final respects.

Today the Knights of the Preceptory try their best to live up to the high ideal standards of humility, courage, constancy and faith so nobly displayed by St. Hugh of Lincoln.